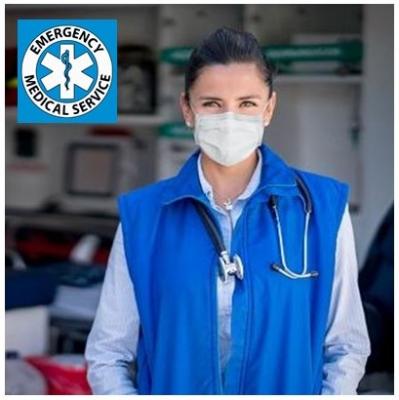 A first responder is a person with specialized training who is among the first to arrive and aid at the scene of an emergency, such as an accident, natural disaster, or terrorism. First responders typically include law enforcement officers, Paramedics, EMT's and firefighters. In some areas, emergency department personnel are also required to respond to disasters and critical situations, designating them first responders.

Due to the high level of stress and uncertainty associated with the position, first responders must maintain physical and mental health. Even with such preparation, they face unique risks of being the first people to aid those with unknown contagions. For example, in 2003 first responders were among the earliest victims of the previously unknown SARS virus, when they cared for patients affected with the virus.

Infectious disease has continued to be a major occupational health concern among first responders with the COVID-19 pandemic. As the largest component of the health care workforce, nurses represent a significant resource that can be called on to act as first responders during a serious emergency. Specific precautions for first responders include modified call queries, symptom screening, universal PPE use, hand hygiene, physical distancing, and stringent disinfection protocols.

As of early 2021, hospitals in at least 25 states are critically short of nurses, doctors, and other staff as coronavirus cases surge across the United States, according to the industry’s trade association and a tally conducted by STAT. The situation has gotten so bad that in some places, severely ill patients have been transferred hundreds of miles for an available bed. Staffing shortages are a serious concern in multiple regions. Intensive care unit nurses, who typically oversee no more than two patients at a time, are now being pushed to care for six to eight patients to make up for the shortfall. (Image, healthvermont.gov)

The Federal Emergency Management Agency is an agency of the United States Department of Homeland Security, initially created under President Jimmy Carter by Presidential Reorganization Plan No. 3 of 1978 and implemented by two Executive Orders on April 1, 1979.