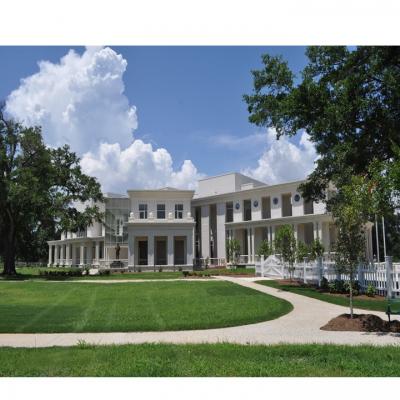 The Jefferson Davis Presidential Library has three main components: a research library, a theater, and an exhibit gallery.

The research library maintains records of the Beauvoir soldiers’ home and those who lived there, the cemetery records, the Beauvoir archives, and general secondary sources studying Jefferson Davis and the War Between the States. Of particular interest, the archives house original Davis family documents as well as a large portion of the Dorsey, Davis, and soldiers’ home collections.

The exhibit galleries include the Jefferson Davis Gallery, the Confederate Soldier’s Gallery, as well as several exhibits that rotate throughout the year. The exhibits in the Jefferson Davis gallery include Davis family documents, photographs, clothing, and other personal items. Of special interest is the cloak worn when Davis was captured by Union troops near Irwinville, Georgia. It disproves the widespread falsehood that he was dressed in women’s clothing to avoid capture. The Confederate Soldier’s gallery exhibits are rotated on a regular schedule, and feature items ranging from rare Confederate uniforms to rifled muskets to soldier’s letters, etc.