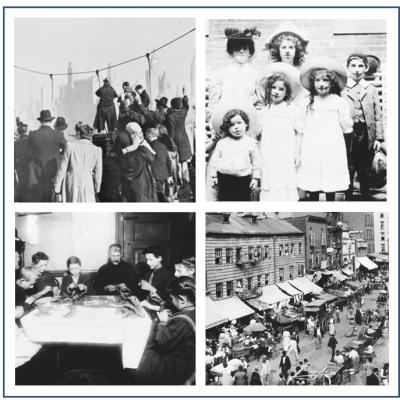 Jewish immigrants to the United States did not come from a single country. In the mid-1880s, Jews appeared among the many newcomers from Germany. During the last two decades of the nineteenth century and the first two decades of the twentieth century, their principal points of departure lay to the east. During those years, central and eastern Europe lost more than one-third of its Jewish population, and 90 percent of the emigrants came to the United States. About three out of every four Jewish immigrants came from Russia or from other territories controlled by the czar, including the area that would become Poland after World War I. Almost 20 percent came from lands of the Austro-Hungarian empire; most of the remainder came from Romania.

European Jews valued early marriages and large families. Moreover, the sanitary and dietary practices prescribed by their religion helped protect them against some diseases. Increases in the population put at least as much pressure on Jews as on their neighbors. Furthermore, Jews were outsiders in Christian Europe. Especially within areas controlled by Russians, the state policy had been, through force or persuasion, to separate Jews from their culture. The czars limited where Jews could live to a circumscribed area of western territory known as the Pale of Settlement. They also blocked the Jews from certain economic pursuits, including the ownership of farms, and forced them into commercial and industrial occupations.

Jewish emigration started, ironically, among those who already had been loosened from their roots. The first to go were those who had abandoned the traditional Jewish villages, or shtetls, to seek work in cities such as Warsaw and Vilna. Among them were many who had been exposed to such secular intellectual movements as the Haskala, which called for the modernization of Jewish life; Socialism, which appealed to their economic rather than ethnic or religious interests; and Zionism, which supported the creation of a Jewish state.

Initially, a disproportionately large number of Jewish emigrants originated in Lithuania, Byelorussia and other districts in the northwest sector of the Pale. Departures later quickened in the south, when pogroms—organized physical attacks on Jews—broke out there in the first decade of the new century. Even without persecution, however, the flight of the Jews from Europe would have been massive. For example, the rate of Jewish emigration from the relatively benevolent Austro-Hungarian empire was three-fifths as high as that from the more hostile states of Russia and Romania. (Text and photographs from the Americans All Classroom Resources.)

Henri Castro, empresario (a land agent or land contractor, under the system used by the Mexican government as a means of colonization) and founder of Castro's colony, was born in the department of Landes, France, in July 1786. His family, descended from Portuguese Jews who had fled to France after the inception of the Spanish Inquisition, occupied a position of wealth and status in southwestern France.