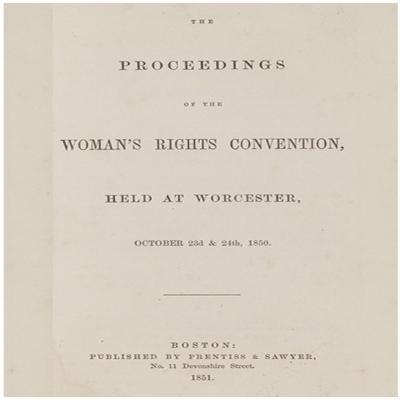 1850: The “Bloomer” dress
As well as being editor of The Lily, Amelia Jenks Bloomer’s most influential work was in dress reform. After noticing the health hazards and restrictive nature of corsets and dresses, she pushed for women to adopt a new style of dress. The pantaloons, now called Bloomers, not only illustrated a departure from the accepted dress for women, the garments also came to represent activists in the women’s rights movement. The style of dress attracted much ridicule from conservative men and women. [https://blogs.loc.gov/teachers/2019/11/bicycles-bloomers-and-the-vote-dress-reform]

1851: Sojourner Truth’s Speech
On May 29: Sojourner Truth [15] gives her “Ain’t I a Woman” speech at a Women’s Convention in Akron, Ohio. [https://www.nps.gov/articles/sojourner-truth.htm]

1851: (On the) Enfranchisement of Women
When this essay first appeared in the Westminster and Foreign Quarterly Review, it was initially attributed to John Stuart Mill, but he later credited the essay to his wife, Harriet Hardy Taylor Mill [14]. [http://www1.assumption.edu/whw/old/Taylor_Enfranchisement]

1853: The Una
Abolitionist, suffragist and educator Paulina Kellogg Wright Davis [25] publishes The Una, [20] in Rhode Island. This is the first newspaper devoted to woman’s rights. [http://library.providence.edu/encompass/the-struggle-for-woman-suffrage-in-rhode-island/primary-sources/the-una]

1853: New York City clinic
Elizabeth Blackwell's hospital opened its doors on May 12, the 37th birthday of Florence Nightingale, whom she had befriended earlier in her career. The hospital was open seven days a week and provided medical care for needy women and children free of charge. [https://noho.bid/neighborhood-history-elizabeth-blackwell-and-new-york-infirmary-women-and-children]

1853: First ordained woman minister
In September, Antoinette Louisa Brown Blackwell [24] becomes an ordained minister of the Congregational church in South Butler, N.Y. She works throughout her life to validate women’s public role by challenging traditional barriers that restricted them. [https://www.britannica.com/biography/Antoinette-Brown-Blackwell]

1854: The Fifth National Women’s Rights Convention
This is held in Philadelphia, October 18-20. [https://www.nps.gov/wori/learn/historyculture/more-womens-rights-conventions.htm]

1854: Territory of Washington
The Legislature considers a law granting women the right to vote. It is defeated by a single vote. Shortly after, the Legislature passes a law stating that “no female shall have the right of ballot or vote.” [http://web.leg.wa.gov/WomenInTheLegislature/1854-1912.htm]

1855: The Sixth National Women’s Rights Convention
This is held in Cincinnati, Ohio, October 17-18. The crowd is standing room only. [https://en.wikipedia.org/wiki/National_Women%27s_Rights_Convention]

1855: One of the first women to keep her own name after marriage
During the wedding ceremony of abolitionist and suffragist Lucy Stone’s [17] to Henry Blackwell (whose sister Elizabeth was the first women to graduate from medical school), they dropped the word “obey” and she chose to continue her life using her maiden name. [https://time.com/5537834/lucy-stone-maiden-names-womens-history]

1855: Improved birth control
The rubber vulcanization process was patented by Charles Goodyear in 1844. The first reliable rubber condom was produced in 1855 and enabled safer sex and protection from venereal diseases. [https://connecticuthistory.org/charles-goodyear-and-the-vulcanization-of-rubber]

1857: Dred Scott v. Sandford (60 U.S. 393)
The U.S. Supreme Court rules that the U.S. Constitution is not meant to include Black people as citizens. The Dred Scott decision is later overturned by the Thirteenth Amendment (abolishing slavery) and the Fourteenth Amendment (conferring citizenship on all persons born or naturalized in the U.S.). [https://www.ourdocuments.gov/doc.php?flash=true&doc=29]

1857: Iowa’s new state constitution
The right of suffrage is limited to [white] male citizens. No reference to women. [http://publications.iowa.gov/9996/1/iowa_constitution_1857002.pdf]

1858: The Eighth National Woman’s Rights Convention
This is held in New York City, May 13-14. [https://www.nps.gov/wori/learn/historyculture/more-womens-rights-conventions.htm]

1861: Kansas Territory becomes the state of Kansas
The Kansas Constitution, originally known as the Wyandotte Constitution, was the fourth constitution proposed by the Territorial Legislature. President James Buchanan signed the bill into law on January 29, making Kansas the 34th state to enter the Union. It includes the rights of women to participate in school district elections. [https://www.kssos.org/other/constitution.html] 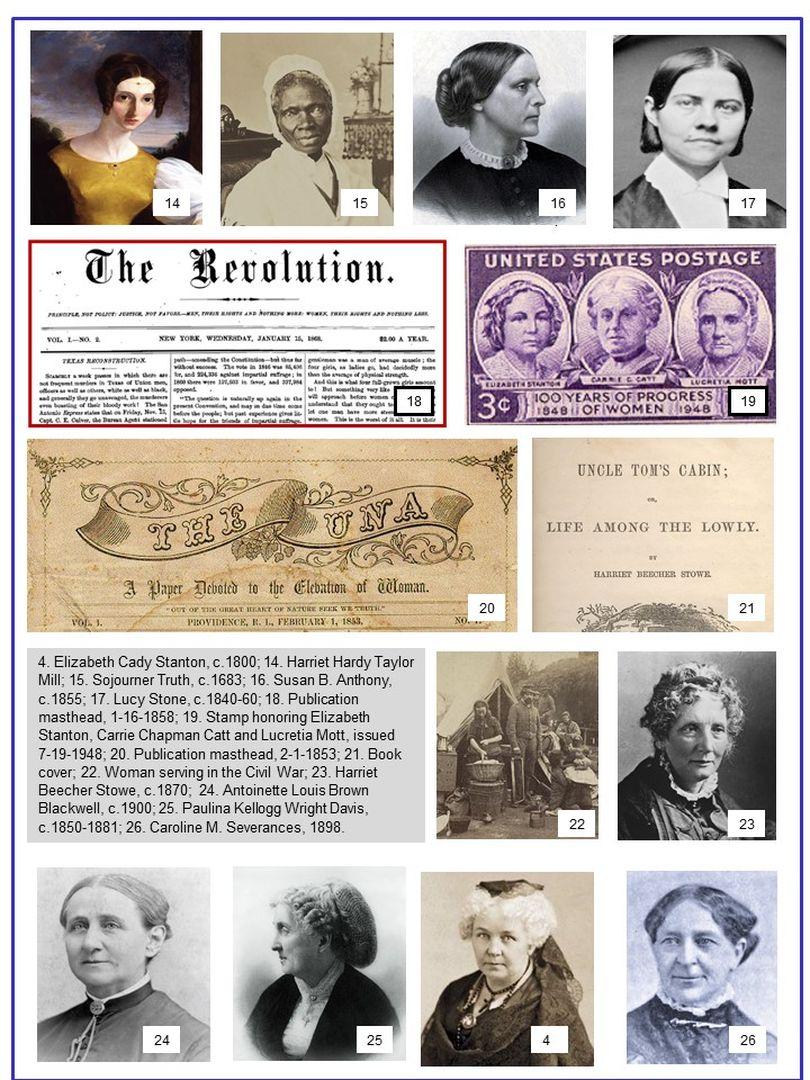