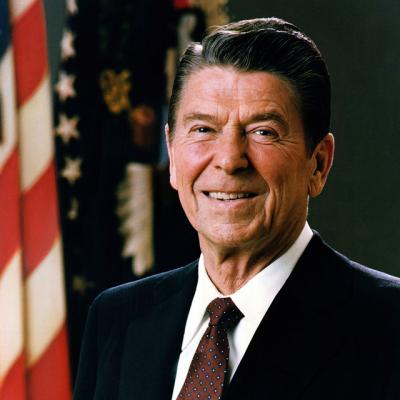 On February 6, 1911, Ronald Wilson Reagan was born in Tampico, Illinois in a five-room apartment on main street. Like most homes in town, it did not have running water or an indoor toilet. The town had a population of 820, one main street, a railroad station, two or three churches and a couple of stores.

He was born to John and Nelle Reagan and had an older brother Neil, who was 2. When John saw his new son, according to family legend he said “He looks like a fat little Dutchman. But who knows, he might grow up to be president some day. . .” Because Nelle had a difficult childbirth with Ronald, the Reagan family was now complete.

Ronald’s father, John “Jack” Edward Reagan, was born July 13, 1883, and his ancestors had come to America from County Tipperary by way of England during Ireland’s Great Hunger. He believed strongly that all men and women, regardless of their color or religion, were created equal and that individuals determine their own destiny—that their own ambition and hard work in life largely determine their fate. From his father, he learned the value of hard work, the importance of tolerance, the rewards of ambition, and inherited a great penchant for storytelling. His mother, Nelle Clyde Wilson Reagan, was born July 18, 1882, the youngest of seven children in a family of Scots-English descent. She married Jack in 1904 and taught Ronald the value of prayer, and how to have dreams and believe they could come true.

In 1913, Ronald and his family moved to Chicago, where his father had taken a job selling shoes at Marshall Field’s department store. Less than two years later, Ronald’s brother Jack was offered a job in Galesburg, a quiet small town 140 miles west of Chicago. Ronald taught himself to read at age 5, and by first grade, he discovered he had a very good memory and could pick up something to read and memorize it easily.

In 1917, the family moved again—this time to Monmouth, Illinois. There he experienced Armistice Day—celebrating the end of “the war to end all wars.” He also realized that some of the troops he saw depart from town had died on European soil and would not be returning to celebrate. Soon after the war ended, the Reagans moved again—back to Tampico. Jack returned to his old job and learned how to manage a shoe store. The following year, the Reagans moved again—to Dixon, Illinois where Jack helped open a shoe store.

Moving so often during his formative years was difficult. Ronald became a bit introverted and was shy about making deep friendships. He would read, draw, and explore his surroundings, but had a reluctance to get too close to people that he might have to say good-bye too soon. In Dixon that all changed as he finally felt established in the community and at home with his surroundings.

In 1924, he entered Dixon High School with a strong love for football, but at 5’3” and 108 pounds, his coach wasn’t even sure they had regulation pants to fit him. When he failed to make the team, he worked the summer to put on muscle. In the fall of 1925, he was proudly named the captain of the football team in a newly established division for players under 135 pounds. By his senior year, he was 5’10½”, 160 pounds and a proud right guard and tackle. He also was the captain of the swim team, president of the Dramatic Club, art director of the yearbook and vice president in charge of entertainment for the YMCA’s Hi-Y Club. He was also elected Student Body President and had his first real leadership experience.

Starting in 1925, and continuing for the next 7 summers, he was the proud lifeguard of Lowell Park’s swimming section of the Rock River, saving 77 lives, a number he kept track of by cutting a notch in a log on the river’s edge each time he pulled someone in need out of the water. And it was at Lowell Park, he learned to ride a horse, a skill he kept for his entire life.

In the 1920s, fewer than 7% of high school graduates in America attended college, but he was determined to be among them. He wanted to go to nearby Eureka College but knew that financially his parents would not be able to help, so he would have to work it out on his own. Tuition was $180 a year plus room and board, which was nearly as much. During his years of working construction and lifeguarding, he managed to save $400—not nearly enough. He then met with the school’s president the football coach, convincing them he was someone who would be a great addition to their football and swim teams and would provide leadership to their student body. They agreed to give him a Needy Student Scholarship to cover half of his tuition and promised a job that would cover his meals. He would need to cover the rest and supplemented his income by serving tables and washing dishes. He graduated in 1932 with a B.A. degree in Economics and Sociology.

Eureka’s theater arts teacher had entered his department in a nation-wide competition. Not only did they place second, but he was selected as one of three performers to receive an individual acting award. His dream was born, but in those days in Dixon, acting in Hollywood seemed as remote and impossible as a trip to the moon.

After graduation, he hitchhiked to Chicago and looked for a broadcasting job. But there were few jobs open during the Great Depression, so he hitched back to Dixon to work but could not find what he wanted. Still determined to get into broadcasting, he visited other areas but had no success. He then crossed the river into Iowa and stopped at station WOC in Davenport.

At WOC, the program director asked Reagan if he knew anything about football, which of course, after his years of playing in high school and in college, he did. After calling a “pretend” game, the director liked what he heard and hired him on the spot—paying him $5.00 plus bus fare to broadcast the Iowa-Minnesota Homecoming game. He called 3 more games, but at the end of the season, WOC did not have a continuing position for him, so Ronald Reagan went home again to Dixon, hoping to find another job. In 1935, he enlisted as a private in the Army Reserve.

He planned on another summer of lifeguarding at Lowell Park but received a call to fill a vacant staff announcer position at WOC, which paid $100 a month. Without any real training or instructions, he failed miserably at first, but friends helped him improve his on-air delivery, his rhythm, cadence and emotion. It worked and his steady progress saved his job.

WOC soon closed and joined WHO in Des Moines, one of the most powerful NBC stations in the country—and Ronald Reagan was its sportscaster. He was making $75 a week, but more importantly, was making a name for himself throughout the mid-west and could now help his family financially. By the age of 22, he had already achieved his dream. If life would have stopped there, he would have been happy—but his life had barely begun.

That new life began in 1934 when he went to California to broadcast the Chicago Cubs’ spring training. Little did he realize then that this was the first step away from Dixon and the mid-west that had nurtured him—and the mid-west that he loved. As he said good-bye, he took the faith and optimism of his mother, the humor and tolerance of his father and the core values of community and hard work he had learned as a boy. He took his education, his ambition and his dreams west, not knowing how deeply he would embrace life there, nor how he would impact California and be embraced by it.

In 1937, he took a ferry from the spring training facility on Catalina Island and went to meet a friend, Joy Hodges, at the Biltmore Hotel in Los Angeles. She had worked with him at radio station WHO and now was singing at night with a band and trying to get into the movies. He told her that he wanted to become an actor and she arranged a meeting with an agent. This agent saw potential—especially his voice— 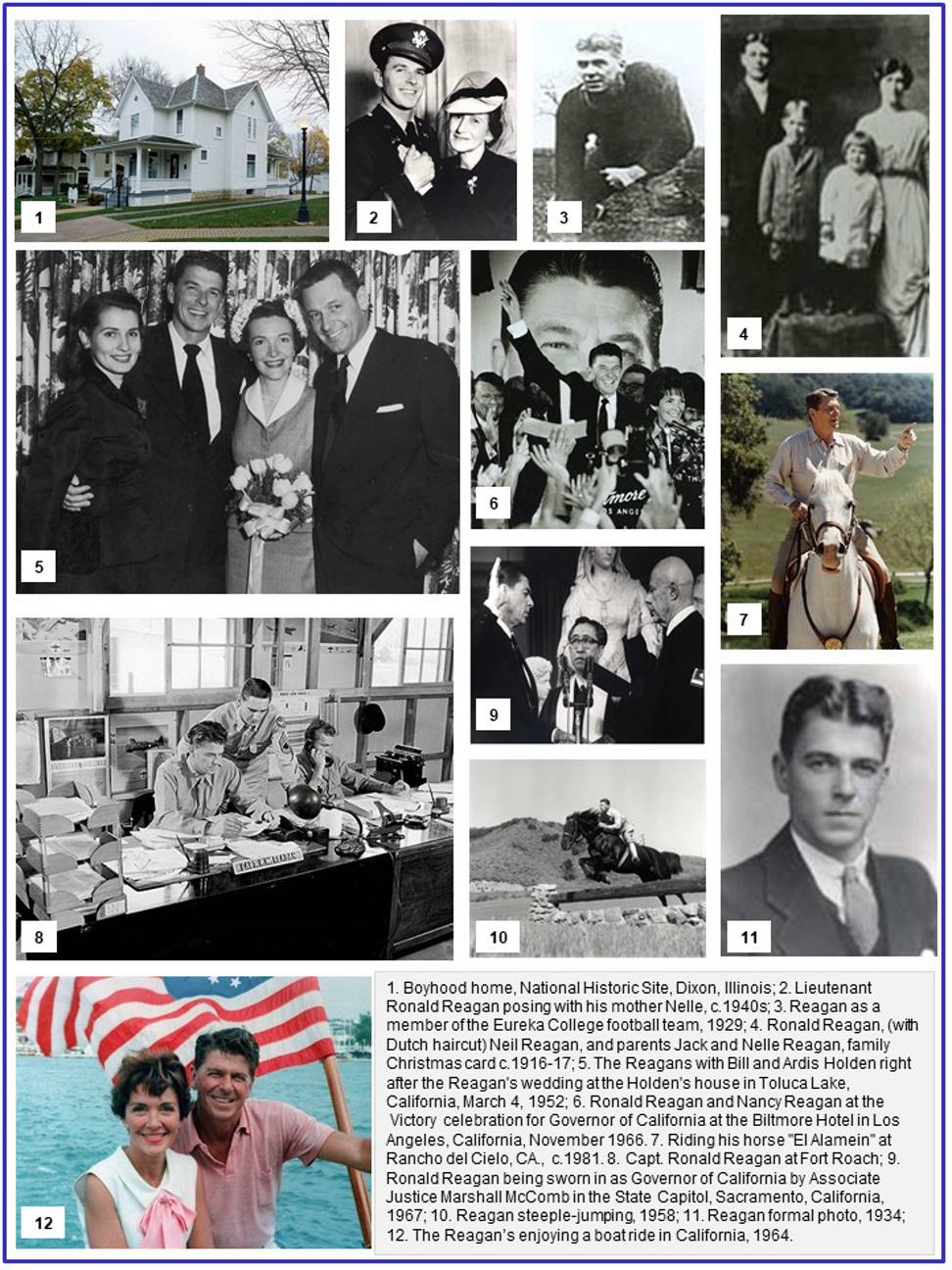