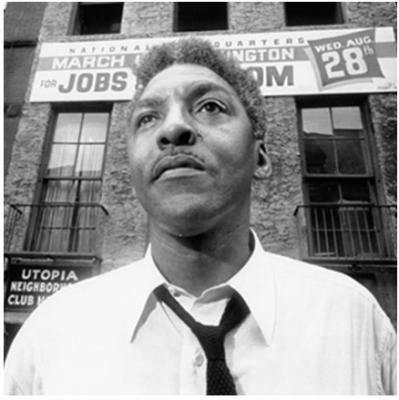 Note. This legacy story contains four photograph montages that incorporate images of individuals and events important in the life of Bayard Rustin. The montages are summarized below, and each can be viewed and/or download in 8.5” x 11” formats by clicking on this link. Each image in the photograph collection is linked to the text by a [number in bold brackets]. Photographs credits are listed with the full size montages.

For more than 50 years, Bayard Rustin was a nonviolent activist and leading strategist in the struggle for human rights and economic justice. As a gay man with radical politics, he was often marginalized despite his major contributions to the struggle for African American civil rights and his work for peace and disarmament. Since his death in 1987 numerous biographies and a feature length documentary,“Brother Outsider, The Life of Bayard Rustin,” [10] have recognized the importance of his work in building a more democratic and egalitarian society. In 2013 he was awarded a posthumous President Medal of Freedom [40] by President Barack Obama.

Bayard Rustin was born in 1912 in West Chester, PA, to an unwed couple, Florence Rustin and Archie Hopkins. His maternal grandparents, Julia (Davis) [1] and Janifer Rustin, raised him as their own. As a child, Julia had lived in a Quaker household where her mother was a domestic servant. She attended West Chester Friends School and was taught the values of equality, integrity, the oneness of the human family, and a belief in the nonviolent resolution of conflict. Motivated by these beliefs she became an activist and leader in the community, joining the newly formed National Association for the Advancement of Colored People (NAACP) while also working as a nurse. Janifer Rustin was a member of the African Methodist Episcopal (AME) church, and while Julia attended AME services after her marriage, it was her Quaker upbringing that informed her activism. The Rustin home was a way station for traveling African American leaders such as W.E.B. Du Bois [2] and James Weldon Johnson, [3] who were not welcome at local hotels. Such distinguished visitors and the values instilled in Bayard by his grandparents set him on a course to challenge racially discriminatory “Jim Crow” laws, beginning as a high school student.

Despite being an outstanding student [6], athlete [7], and musician, Bayard was denied the scholarship help that would enable many white students to further their education. Julia’s determination to challenge this injustice resulted in her raising funds for Bayard to matriculate at the nation’s first historically Black college, Wilberforce [12], in Ohio. He was active in several campus organizations including the famed Wilberforce Quartet [11], but was expelled in 1936 for organizing a student strike. He went on to attend Cheyney State College, and while not completing a degree program, he was honored with a posthumous "Doctor of Humane Letters" degree in 2013.

After completing a workshop in activist training with the Quaker sponsored American Friends Service Committee, Rustin moved to New York City in 1937. Rooming with his aunt and uncle in Harlem, he enrolled at City College [9], then often called “the poor man’s Harvard.” The Harlem Renaissance was ending, but the area was still a community of artists, writers, composers, performers, and intellectuals. Bayard earned his keep singing with Josh White’s Carolinians [8], briefly working as a teacher for the Works Progress Administration (WPA), and doing odd jobs. City College was a breeding ground for political activists and Bayard joined the Young Communist League, one of the few entities that addressed the problem of racism at the time. He worked as a youth organizer addressing the issues of racial segregation and peace. Initially opposed to World War II, the YCL reversed its position after Hitler's Operation Barbarossa attacked the Soviet Union in June of 1941. Ordered to cease his work and support the “people’s war,” Rustin [5] realized that the Communist Party USA was just a mouthpiece for Soviet policy and had no genuine interest in racial justice work or peace building.

Disillusioned, he quit the YCL and began working with A. Philip Randolph, founding president of The Brotherhood of Sleeping Car Porters (BSCP), the premier Black trade union. Dubbed “the most dangerous Negro in America,” Randolph was both a trade union leader and a major force working for African American civil rights. Simultaneously, Rustin began a long association with a socialist colleague of Randolph’s, Rev. A.J. Muste [4], the head of the Christian pacifist Fellowship of Reconciliation (FOR) [13]. Serving as the FOR’s Race Relations Secretary, Bayard toured the country conducting Race Relations Institutes designed to facilitate understanding among racial groups. He was an impressive speaker, often ending his talks with a Negro spiritual. Active in Randolph’s March on Washington Movement [19], Bayard also became the first field secretary of the Congress of Racial Equality (CORE), group that began as a small committee of the FOR. In 1942 the FOR and the American Friends Service Committee sent him to the west coast to help protect the property of the more than 1,200 Japanese-Americans imprisoned in internment camps. During this time, he became acquainted with Norman Thomas [18], a leader in the democratic socialist movement in America. He joined the movement and remained a democratic socialist for the remainder of his life.

Bayard Rustin was also a pioneer in the movement to desegregate interstate bus travel. In 1942, he boarded a bus Louisville, KY, bound for Nashville, TN, and sat in the second row. Several drivers ordered him to adhere to the policy of “Jim Crow” seating and move to the rear. He refused and police stopped the bus 13 miles north of Nashville. Rustin was dragged off, beaten, and arrested. He was later released without charges after a white passenger who had witnessed the encounter, testified on his behalf.

He spoke about his decision to be arrested, and how that moment also clarified his witness as a gay person, in an interview with the Washington Blade. [After a confrontation with an innocent child on the bus about sitting in the back], Bayard Rustin said “ . . . I owe it to that child, not only to my own dignity, I owe it to that child, that it should be educated to know that blacks do not want to sit in the back, and therefore I should get arrested, letting all these white people in the bus know that I do not accept that. It occurred to me shortly after that that it was an absolute necessity for me to declare homosexuality, because if I didn't I was a part of the prejudice. I was aiding and abetting the prejudice that was a part of the effort to destroy me.”

A committed pacifist, Bayard Rustin refused to comply with the Selective Service Act, and refused to perform alternative service in a Civilian Public Service camp established for religious objectors. Early in 1944 he was sentenced [22] to three years in federal prison. While incarcerated he continued his activism, organizing protests against segregated dining halls, recreational facilities, and educational programs. He was released from prison shortly after the end of the war.

In 1947, under the auspices of the FOR and CORE, Rustin helped plan the first “freedom ride [20]”, challenging “Jim Crow” practices in the South. The U.S. Supreme Court in a landmark decision, Morgan v. Virginia, 328 U.S. 373, in 1946, had struck down segregated seating policies on interstate travel. Known as the Journey of Reconciliation, riders engaged in nonviolent direct action by intentionally violating the segregated seating patterns on interstate buses and trains in the South. Along the way, they were beaten, arrested and fined. Following one arrest he was sentenced . . . 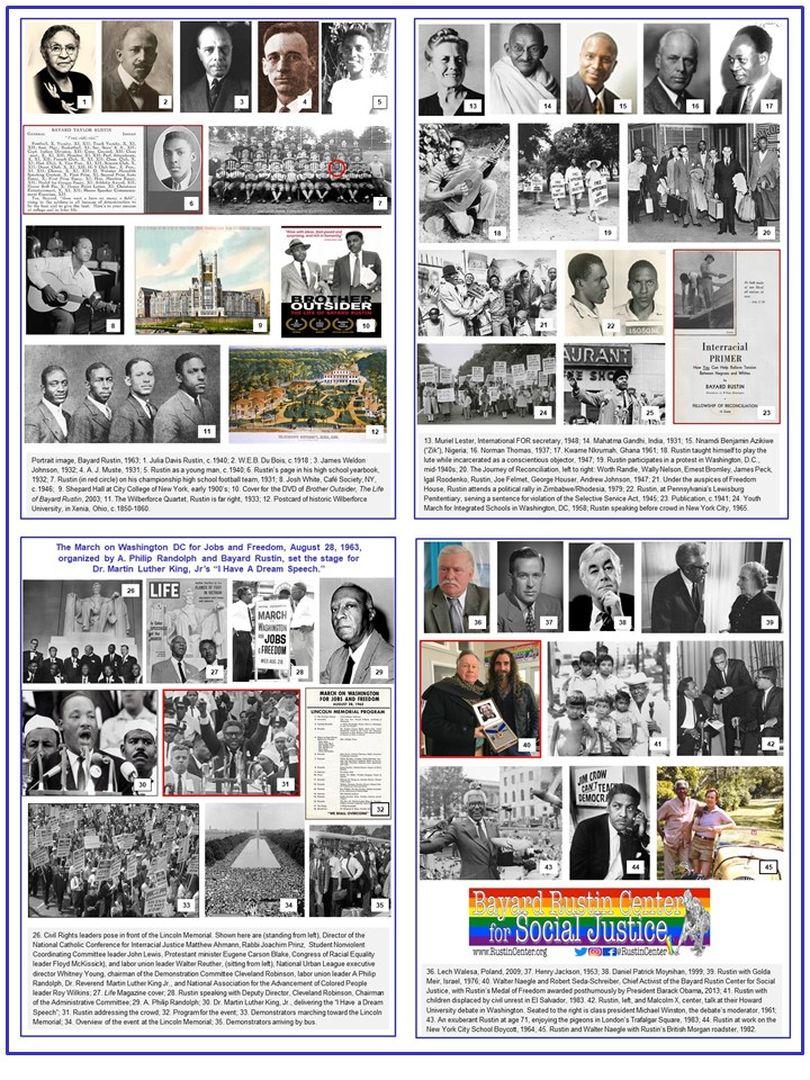