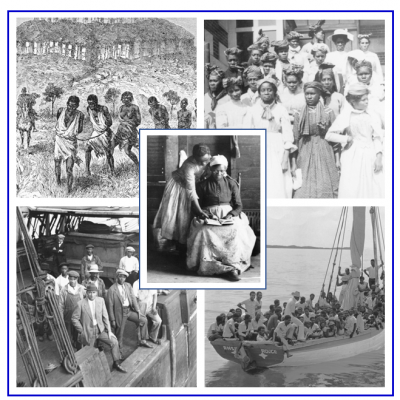 We offer two historical perspectives on the African American experience. The first emphasizes the economic and cultural impact of Africans and their descendants in the United States. The second places Africans within the context of the immigrant experience, pointing out that African immigrants have been as ambitious and creative as any others and that their desire to live the American dream remains undiminished.

First: Different forces prompted immigration to the United States for each ethnic group. For the ancestors of most African Americans, the need for workers on plantations drove the immigration process. For nearly four centuries, European slave ships transported captive Africans from their homelands to the Americas. These Africans came to a land of bondage and faced a severe test of their powers of endurance. Among African Americans, the search for freedom in America has continued for generations.

Africans made up a substantial percentage of the population of British colonial America and then the United States. In 1790 the first census revealed that African Americans made up more than 19 percent of the non-Indian population. The southern states, where the economy relied on enslaved laborers, had African majorities in many areas. For several decades captive Africans continued to arrive on slave ships to be sold to plantation owners or local slave merchants in such cities as Baltimore, Charleston and New Orleans.

While European immigrants were coming to America to escape political or religious persecution or to pursue a dream of economic security, Africans came involuntarily and were exploited to produce prosperity for others.

Second: Conventional wisdom encourages the belief that people of African descent came to the United States as latecomers, with the only early immigrants arriving as enslaved people and becoming, through acquired status and conditioning, a confined, secluded, homogeneous and subordinate group in society. Yet so much of this conventional thinking is untested and perhaps untrue.

Myths, mistakes or misunderstandings, the misconceptions nevertheless play a crucial role in shaping the images held about African Americans and the way they are regarded and treated in everyday life as well as in popular history. One such image ignores the fact that some came to this country knowingly, sometimes more willingly than others, in hopes of bettering their personal, political or socioeconomic condition. Despite their fears as people of color, they came from distant homelands, attracted to the unlimited possibilities promised in the lore of the American way of life. (Text and photographs from the Americans All Classroom Resources.)