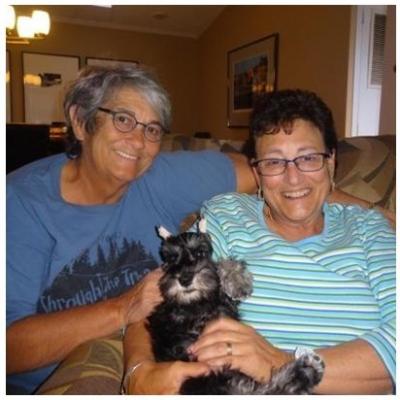 In 1982, Fay Jacobs, a writer, performer, public relations consultant and GLBT activist from NYC to Washington, DC, then Rehoboth Beach, met Bonnie Quesenberry, owner of a Baltimore Dental Laboratory who served her country with distinction in both the Army and Navy, have shared their lives as a couple since August 2003.

Fay was the publisher of A&M Books, a successor to the legendary Naiad Press—a business she inherited from lesbian publishing pioneers Anyda Marchant and Muriel Crawford. In 2015, she merged A&M with the publishing house Bywater Books. She has authored four published books of her essays: As I Lay Frying – a Rehoboth Beach Memoir, Fried & True – Tales from Rehoboth Beach, winner of the 2008 National Federation of Press Women Book of the Year for humor, For Frying Out Loud – Rehoboth Beach Diaries, winner of ForeWord Reviews Humor Book of the Year, a Goldie Award, American Library Association Over the Rainbow nomination and the 2011 National Federation of Press Women Humor Book of the Year.

Bonnie owned a Baltimore dental laboratory handling challenging medical cases for Johns Hopkins Hospital, Children’s Hospital in Baltimore and others. She served in the U.S. Navy 1968-1971 and the U.S. Army 1973-1976. She studied dental technology at Baltimore Community College, worked in the field at the University of Maryland and started her own lab in 1977. She did a research project on the effects of acidulated fluoride on porcelain and was recognized for the work at the International Dental Congress in 1981. Bonnie operated the lab through the move to Rehoboth Beach and retired in 2006

In 1982, Fay Jacobs, a writer, performer, public relations consultant and GLBT activist, met Bonnie Quesenberry, owner of a Baltimore Dental Laboratory who served her country with distinction in both the Army and Navy, have shared their lives as a couple for 34 years.

Fay Jacobs is a writer and humorist from NYC transplanted to Washington, DC, then Rehoboth Beach, DE. She has four published books, is a GLBT activist and is married to Bonnie Quesenberry. She has kept company with a long line of Schnauzers and lives by the motto "nothing is ever so bad if it's worth the story you can tell."