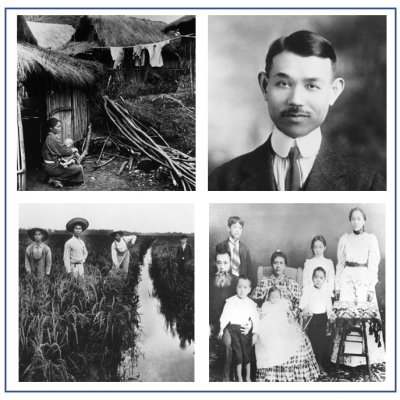 Tales tell of shipwrecked Japanese fishermen drifting thousands of miles east to Hawaii as early as the twelfth or thirteenth centuries. They probably were absorbed into the native Hawaiian population. The first organized groups of Japanese immigrants, however, arrived in Hawaii and Eldorado County, California, in 1868, the year Japan’s old feudal system was overthrown and replaced by ambitious officials determined to create a modern and powerful nation. Japan did become a world power but, like other nations that achieved this stature, allowed many of its people to suffer greatly. The government was forced to allow some of them to leave the country to find better lives.

Thousands of Japanese people left for work on the sugar plantations of Hawaii beginning in 1885. Most were young men, but nearly 20 percent were women, and a few were children. This inclusion of women meant Japanese immigrants were much better off than Chinese immigrants who came before them or the groups of Filipinos who came after them, both with far more men than women.

These early Japanese immigrants arrived in Hawaii while it was still a monarchy — with King Kalakaua reigning over an independent and sovereign nation. Foreigners, mostly Americans, led a rebellion that overthrew the monarchy in 1893, and the United States annexed the islands in 1898. One of the most striking things about Japanese immigrants was the wide diversity among them. They ranged in age from infancy to middle age.

Whether in Hawaii or on the mainland, labor unions generally tried to keep Japanese immigrants out, even though they were well qualified. This racism prevented unified and effective action for many years to come.

Rihei Onishi, a journalist for the Jiji Shimpo, a Tokyo daily newspaper, first came to the United States with his wealthy wine-merchant cousin, Toraichi Onishi, in 1903. They were impressed with the possibilities of growing rice in Texas and purchased approximately 300 acres of land to do so.