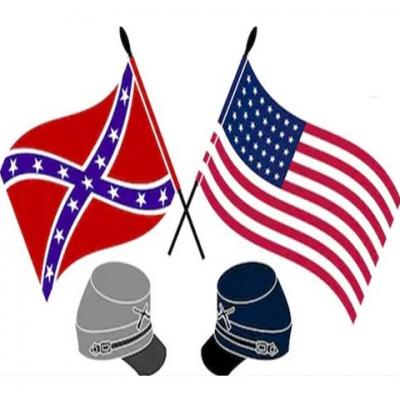 The U.S. Civil War (the War Between the States or the War of Southern Rebellion) began as attempts at compromise on the slavery issue fail. In addition to slavery, the war arose out of the economic and political rivalry between an agrarian South and an industrial North, and the issue of the right of states to secede from the Union. Click here to view "Timeline of the Civil War: Background and Causes."

To achieve separation, a convention of delegates from six of the cotton-growing states, Alabama, Florida, Georgia, Louisiana, Mississippi, and South Carolina (Texas was added later), met in Montgomery, Alabama, February 4, and established a government under the title of "The Confederate States of America" with Jefferson Davis [1] as president (January through March). On March 21, Alexander H. Stephens, [2] Vice-President of the Confederacy declared: “The Confederacy's foundations are laid, its cornerstone rests upon the great truth, that the negro is not equal to the white man; that slavery subordination to the superior race is his natural and moral condition. This, our new government, is the first, in the history of the world, based upon this great physical, philosophical, and moral truth."

War begins as Confederate soldiers fire on Fort Sumter [3], located in the middle of the harbor of Charleston, S.C. Its garrison had recently moved there to avoid incidents with local militias in the streets of the city. President Abraham Lincoln [4] told its commander, Major Robert Anderson [5] to hold on until fired upon. Confederate president Jefferson Davis ordered the surrender of the fort. Anderson gave a conditional reply that the Confederate government rejected, and Davis ordered General Pierre Gustave Toutant (P.G.T.) Beauregard [3 inset] to attack the fort before a relief expedition could arrive. He bombarded Fort Sumter on April 12–13, forcing its capitulation. The attack on Fort Sumter rallied the North to the defense of the Union.

Lincoln calls for 75,000 volunteers. The Union’s plan to win the war is imposing a blockade on the South to force starvation; dividing the South by first controlling the Mississippi River and then by marching to the sea through Georgia; and capturing the Confederate capital at Richmond. Southern ports are blockaded by superior northern naval forces. Virginia, Arkansas, Tennessee and North Carolina secede to complete the 11-state Confederacy. The Union army, advancing on Richmond, is repulsed at the first Battle of Bull Run (July 21) but two Confederate forts are captured. Both North and South expected victory to be glorious and quick, but the first major battle signaled the long and deadly war to come. Lincoln appoints General George McClellan [25 inset] to head the Union army. Indian Commissioner Albert Pike, [9] a Confederate supporter, uses promises and gifts to urge Kiowa and Comanche bands to attack Union supply wagons along the Santa Fe Trail. Women’s participation in the war is extensive and varied. More than 400 women, on both sides of the war, put on men’s clothing and go to the battlefields; Harriet Tubman [11] serves the Union army as a cook, nurse and scout; women such as Clara Barton [14], Mary Bickerdyke [13] and Annie Turner Wittenmyer [12] provide emergency care to the wounded. Away from the battlefield, women replace men in factories, fields and classrooms and, after Civil Service restrictions are lifted in 1862, in certain government jobs. In many cities, women form soldiers’ aid societies to help supply the front lines. For example, Mary Ashton Livermore [15] organizes the Great Chicago Sanitary Fair [6] (May 30, 1865), which raises $70,000 to purchase food and medical supplies for the Union army.

Edwin McMasters Stanton [16] is named U.S. Secretary of War. Forces led by Gen. Ulysses S. Grant [17] win the first Union victory, at Fort Donelson, TN (February 11).  Ironclad warships [21], the Union’s USS Monitor and the Confederacy’s CSS Virginia (Merrimack) duel at Hampton Roads, Virginia (March 8). The Confederate army is defeated at Fort Henry (February 6) and Roanoke Island (February 7-8). Grant's success at Fort Henry and Fort Donelson paved the way for the Union to capture Nashville. Grant’s army escapes defeat at Shiloh, Tennessee (April 6-7), though casualties on both sides are devastating in this two-day battle. New Orleans [22] (April 25), a strategic city at the mouth of the Mississippi River falls to the Union fleet under Adm. David Farragut [23], and the city is occupied. This was a turning point in the war, which precipitated the capture of the Mississippi River. However, the controversial and confrontational administration of the city by its U.S. Army military governor caused lasting resentment. Memphis [8] (June 6) falls as northern gunboats get control of the upper Mississippi.

The Confederate army under Gen. Robert E. Lee [24] is victorious at the Second Battle of Bull Run (also known as Second Manassas) on  August 28-30). It was a decisive victory because Lee managed a strategic offensive against an enemy force twice the size of his own. At Antietam [25], MD (September 17), in the bloodiest battle of the war, the Union army under McClellan stops Lee’s forces from advancing on Washington, D.C., and into MD and PA. Lincoln removes McClellan for his lack of aggressiveness and replaces him with Gen. Ambrose Everette Burnside [26], whose drive on Richmond fails at Fredericksburg on December 13. Union forces under Gen. William Starke Rosecrans [27] chase Gen. Braxton Bragg's [28] Confederate troops through TN; the Battle of Murfreesboro [29] (also known as the Battle of Stones River) takes place from December 31 to January 2, 1863. With approximately 24,600 total casualties, Stones River was one of the deadliest battles of the war. Rosecrans claimed victory and the battle provided a much-needed boost to Union morale following their defeat at Fredericksburg, Virginia.

Lincoln signs the Emancipation Proclamation [38], freeing slaves in the rebelling states. Lee’s forces are victorious at Chancellorsville,[30] VA (April 30-May 1), though Confederate Gen. Thomas Johnathan “Stonewall” Jackson [31] dies in battle, shot by one of his own men. A Confederate invasion of PA is stopped at Gettysburg, PA (July 1-3) by Union forces under the command of Gen. George Gorden Meade [32]. Lee’s army suffers the loss of 20,000 men. The Battle of Gettysburg and the Union victory at Vicksburg, MS (May 18-July 4) mark the war’s turning point. The second Battle of Fort Wagner, South Carolina (July 18), also known as the Second Assault on Morris Island, did not have the strategic importance of Gettysburg, but it was a turning point in American history. It was a defeat for the Union Army but a galvanizing victory for freedom. The flag bearer for the 54th Massachusetts regiment was an escaped slave named William Harvey Carney [10], who became the first Black soldier to earn the Medal of Honor. The significance of the 54th demonstrated that African Americans had a right to fight alongside white soldiers. The 54th's leadership is significant because it showed that African Americans are capable of leading. Gen. George Henry Thomas [33], the “Rock of Chickamauga,” and his troops halt Bragg’s Confederate forces at the Georgia-Tennessee border September 18-20). Generals William Tecumseh Sherman [34], Joseph Hooker [35], George Henry Thomas and their troops drive Bragg’s forces back to GA, the Chattanooga Campaign (September 21-November 25). TN is retaken by Union troops in November. Lincoln delivers the Gettysburg Address at the dedication of the Soldiers' National Cemetery in Gettysburg, Pennsylvania, on the afternoon of November 19. 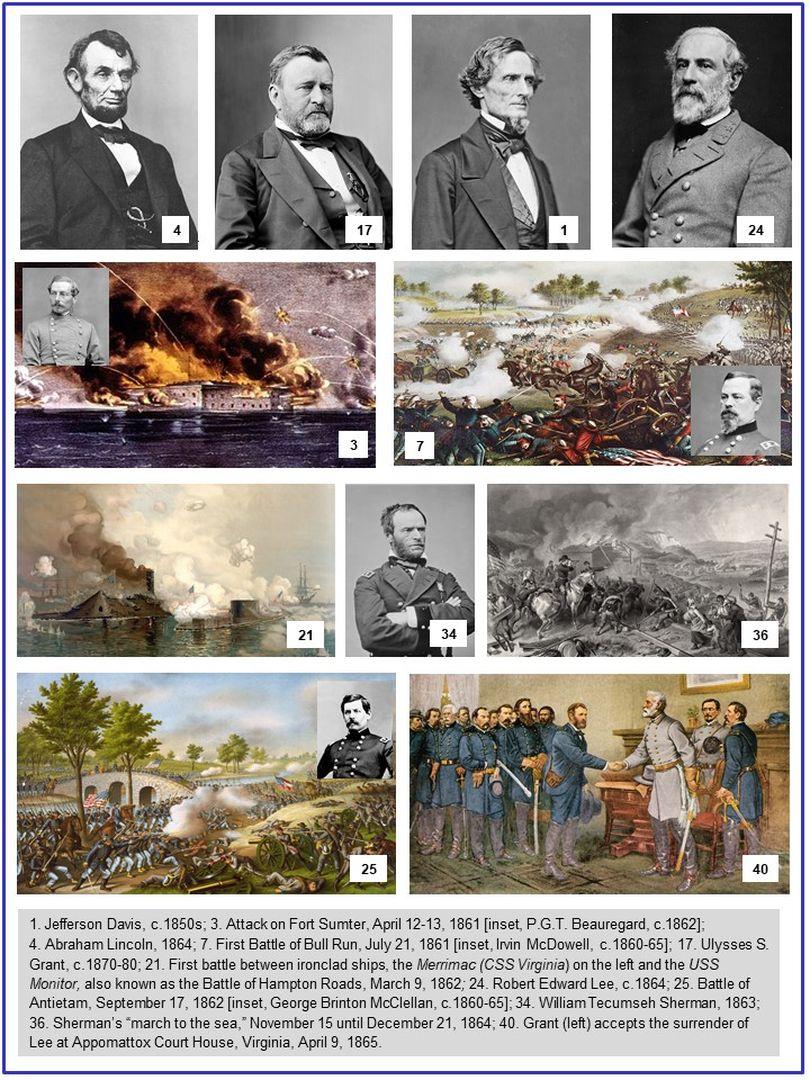