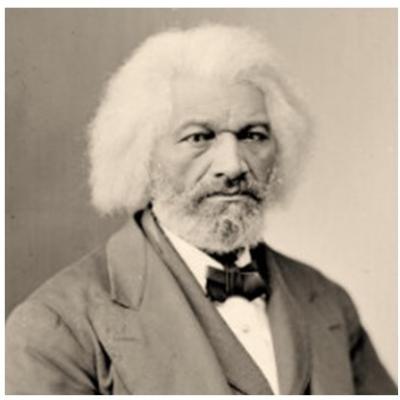 Frederick Augustus Washington Bailey was born into slavery on the Eastern Shore of Maryland in February 1818. He had a difficult family life, and barely knew his mother, who lived on a different plantation and died when he was a young child. He never discovered the identity of his father. At the age of six, he was separated from his grandmother and sent to Wye House Plantation [7] in Maryland. When he turned eight years old, his slaveowner hired him out to work as a valet in Baltimore.

At an early age, Douglass realized there was a connection between literacy and freedom. Not allowed to attend school, he taught himself to read and write in the streets of Baltimore. At twelve, he bought a book called The Columbian Orator [11]. It was a collection of revolutionary speeches, debates, and writings on natural rights. When he was fifteen, his slaveowner sent him back to the Eastern Shore to labor as a fieldhand. He rebelled intensely, educated other slaves, physically fought back against a "slave-breaker," and plotted an unsuccessful escape.

Frustrated, his slaveowner returned him to Baltimore. This time, Frederick met a young free Black woman named Anna Murray, [1] who agreed to help him escape. On September 3, 1838, he disguised himself as a sailor, wearing a red shirt, a tarpaulin hat and a black scarf tied loosely around his neck and boarded a northbound train, using money from Anna to pay for his ticket. He also had to be able to talk like a sailor:

"My knowledge of ships and sailor's talk came much to my assistance, for I knew a ship from stem
to stern, and from keelson to cross-trees, and could talk sailor like an 'old salt.'".

Along with the other Black passengers, Douglass had to show his "free papers"--a document proving he was free and could travel--along with his ticket. Because Douglass was a runaway slave, he didn't have free papers. Instead, he had borrowed what was called a Seaman's Protection Certificate, [13] which proved that a sailor was a citizen of the U.S. Douglass described his nervousness when the conductor came by to collect tickets and look over papers: "My whole future depended upon the decision of this conductor." This is how the conversation went when the conductor reached Douglass in the crowded train car.
"I suppose you have your free papers?"
"No sir; I never carry my free papers to sea with me."
"But you have something to show that you are a freeman, haven't you?"
"Yes, sir, I have a paper with the American eagle on it, and that will carry me around the world."

A quick glance at the paper satisfied the conductor and he took Douglass's fare and went on to the other passengers. This moment was one of the most anxious Douglass had ever experienced. If the conductor had looked closely, he would have noticed that Douglass did not match the description of the person on the form and he would have been required to send him back to slavery in Baltimore. Not only would this have been terrible for Douglass but also the friend, from whom he borrowed the Seaman's Certificate, would have been in serious trouble. Later, when Douglass wrote his first autobiography in 1845, he didn't include the way in which he escaped because some of the people who had helped him could have gotten into trouble. By the time Douglass wrote his revised autobiography in 1881, he included the real description of his daring escape. In less than 24 hours, after traveling by train, ferry boat, and on foot, Frederick arrived in New York City and declared himself free. He had successfully escaped from slavery.

After escaping from slavery, he married Anna. They decided that New York City was not a safe place for Frederick to remain as a fugitive, so they settled in New Bedford, Massachusetts. There, they adopted the last name "Douglass”, and they started their family, which would eventually grow to include five children: Rosetta, Lewis, Frederick Jr., Charles, and Annie. After finding employment as a laborer, Douglass began to attend abolitionist meetings and speak about his experiences in slavery. He soon gained a reputation as an orator, landing a job as an agent for the Massachusetts Anti-Slavery Society [12]. The job took him on speaking tours across the North and Midwest.

His fame as an orator increased as he traveled. Still, some of his audiences suspected he was not truly a fugitive slave. In 1845, he published his first autobiography, Narrative of the Life of Frederick Douglass [14],  to lay those doubts to rest. The narrative gave a clear record of names and places from his enslavement. To avoid being captured and re-enslaved, Douglass traveled overseas. For almost two years, he gave speeches and sold copies of his narrative in England, Ireland, and Scotland. When abolitionists offered to purchase his freedom, Douglass accepted and returned home to the U.S. legally free. He relocated Anna and their children to Rochester, New York.

In Rochester, Douglass took his work in new directions. He embraced the women's rights movement, helped people on the Underground Railroad, and supported anti-slavery political parties. Once an ally of William Lloyd Garrison [2] and his followers, Douglass started to work more closely with Gerrit Smith [3] and John Brown [4]. He bought a printing press and ran his own newspaper, The North Star [6]. It got its name because slaves escaping at night followed the North Star in the sky to freedom. In 1855, he published his second autobiography, My Bondage and My Freedom, which expanded on his first autobiography and challenged racial segregation in the North.

Douglass was active with the Western New York Anti-Slavery Society, and it was through this organization that he met Elizabeth M’Clintock. In July of 1848, M’Clintock invited Douglass to attend the First Women’s Rights Convention in Seneca Falls, New York. Douglass readily accepted, and his participation at the convention revealed his commitment to woman suffrage. He was the only African American to attend. In an issue of the North Star published shortly after the convention, Douglass wrote,

In respect to political rights, we hold woman to be justly entitled to all we claim for man. We go farther and express our conviction
that all political rights which it is expedient for man to exercise, it is equally so for women. All that distinguishes man as an intelligent
and accountable being, is equally true of woman; and if that government is only just which governs by the free consent of the governed,
there can be no reason in the world for denying to woman the exercise of the elective franchise, or a hand in making and administering
the laws of the land. Our doctrine is that “Right is of no sex.”

Douglass continued to support the cause of women after the 1848 convention. In 1866 he, along with Elizabeth Cady Stanton [5] and Susan B. Anthony, founded the American Equal Rights Association, an organization that demanded universal suffrage. Though the group disbanded just three years later due to growing tension between women’s rights activists and Africa American rights activists, Douglass remained influential in both movements, championing the cause of equal rights until his death in 1895.