Native Americans' Contributions to Our Nation 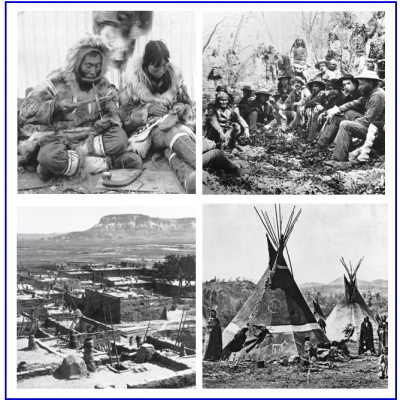 Native American mythology and archeology both indicate that American Indians were the first people on this land. According to tribal legends, American Indians have lived on the North American continent since time immemorial. Most legends share the theme of coming forth from Mother Earth onto this continent, thus any trails from Asia or elsewhere lead to each nation’s legendary place of origin. Archeological evidence dates the appearance of Paleo-Indians—the first inhabitants of the Americas—to at least 12,000 years ago. Subsequent migrations brought the ancestors of the Inuit (Eskimos) and Aleuts to North America.

The Bering Strait, where the Eastern and Western Hemispheres face each other across a narrow strip of water, is the most likely place for migrating groups to have crossed into North America. No compelling evidence indicates immigration via other routes before the Norse arrivals in Greenland and Newfoundland about 1000 A.D. and, if other voyages occurred, they had no significant effect on the origins and composition of existing populations.

Most researchers concur that the peopling of the Americas did not result from a single mass movement. They suggest that small bands trickled across from Asia over thousands of years. Among the last to arrive were the ancestors of the Inuit who, making homes along the Arctic coasts, effectively ended the migrations. Recent linguistic and genetic research, however, seems to point to a few single migrations from Asia to North America. While the debate continues, one fact is certain: American Indians predated all Europeans in North America by tens of thousands of years.

The differences in appearance of the various tribes in recent times stem from the initial diversity of the Asian ancestors, adaptation over several millennia to varied American environments, and different degrees of inter-marriage with people of European and African origins. Differences from relatives in northeastern Asia also derive from changes in the Asian populations after the separation.

Long before the arrival of Europeans, aboriginal peoples of the Americas had successfully adapted to the continent’s diverse environments, developing a variety of cultures and sociopolitical structures that responded to each group’s internal needs and external pressures. Like cultures throughout the world, Native American cultures experienced cycles of fluorescence and expansion. Examples remain visible in the impressive Indian ruins of Arizona and New Mexico, the numerous Indian mounds of the eastern United States and rich remains over the entire continent. (Text and photographs from the Americans All Classroom Resources.)

Susan La Flesche Picotte was the first person to receive federal aid for professional education, and the first American Indian woman in the United States to receive a medical degree. In her remarkable career, she served more than 1,300 people over 450 square miles, giving financial advice and resolving family disputes as well as providing medical care at all hours of the day and night.

Chief Plenty Coups was the last traditional chief of the Crow Nation because, after his death, it was agreed that no other Crow could match his achievements. Born into the Mountain Crow tribe, near Billings, Montana, the Crow Nation and many other major Native American tribes were enduring great hardships.

Chief Standing Bear, head of the Ponca Native American Tribe, successfully argued in 1879 in the U.S. District Court in Omaha that Native Americans are "persons within the meaning of the law" and have the right of habeas corpus.