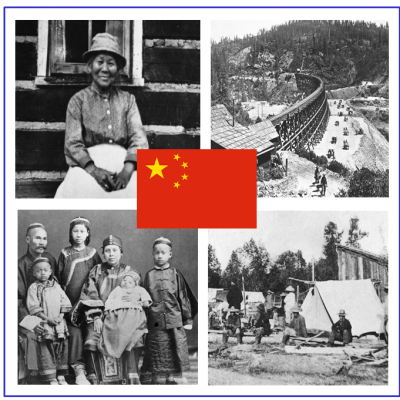 The first Chinese immigrants arrived in the United States in the late 1780s as workers on trading ships sailing out of New York and Baltimore. In the early 1800s, a few Chinese youths came to the United States to learn Western culture as a direct result of American missionary activity.

Until the California gold rush, Chinese immigration was very small and generally limited to a few students, seamen, merchants and domestics. The first major flow of Chinese immigrants to the United States in the mid-nineteenth century was prompted more by the deterioration of southeast China’s economy than by the promise of a bright new future in California’s gold fields. It was part of a general movement stimulated by the need for labor in Western countries and colonies.

Although the gold fields presented economic opportunities, there were also problems because American miners resented foreigners, especially non-Europeans, digging for the precious metal. As the United States entered the 1860s, the move to develop the natural resources of its western states required a cheap and reliable labor source. Chinese people were available. They were very good workers, very adaptable to changing conditions, quick to learn new tasks and not bothered by physical labor. Additional opportunities came with the building of the transcontinental railroad, but the Chinese were paid less than European workers.

After the railroad was completed, Chinese workers turned to agriculture and the service trades. Regardless of their new professions, the new immigrants often felt the sting of anti-Chinese sentiments, and many of those problems were magnified by a lack of understanding of Chinese culture, a problem that still exists today.

Polly Bemis became a legend after her death when her story became a biographical novel and was fictionalized in 1991, by Ruthanne Lum McCunn in the movie, Thousand Pieces of Gold. As such, some details of her story may be tied to folklore, but one thing is clear. As Idaho Governor Cecil Andrus said in 1987 . . . "She is the foremost pioneer on the rugged Salmon River.”

Polly Bemis (born Lalu Nathoy) was sold by her father for two bags of seed to a group of bandits in northern China when he fell on hard economic times because of the famine of 1871. She was then resold into a form of sexual slavery, smuggled into the United States by a slave trader heading for America.

Because she has been the subject of many articles and several books, including the best-seller by Ruthanne Lum McCunn and a fine children's book by Priscilla Wegars, Polly is one of the best-known of all Chinese women in Northwestern history.  Exceptionally self-reliant and adaptable, she was also unusual in that she married a white man in a period when East-West marriages in that direction were very rare.