Hispanic Americans' Contributions to Our Nation 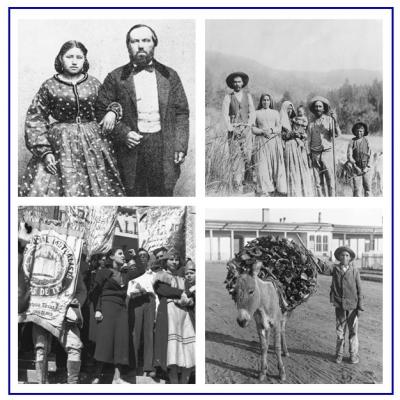 Although Hispanic people in the United States may be unified by a common Spanish language and cultural heritage, they are divided by race, geography, traditional differences, country of origin and the time and circumstances of their entry into this country. For most, that entry has been voluntary and has implied an acceptance of the unspoken obligation of the immigrants and the immigrants’ descendants to adapt to their host country.

Central to the problem of how the United States is to deal with questions of language and culture is the fact that a large percentage of our native-born Mexican American citizens owe their presence to the U.S. policy of “manifest destiny”—a policy of conquest. The Spanish established communities in the Southwest during the late 1500s—before the Pilgrims landed on Plymouth Rock. Mexico ceded these territories to the United States in peace treaties, and the individuals living in them—native language and all—became involuntary inhabitants of the Unites States in much the same way as Native Americans.

The end of World War II triggered major changes in the Anglo-Hispanic relationship. Significant Mexican immigration to the industrial cities of the Midwest had begun in the 1940s. At the same time, Mexican Americans in the Southwest had begun moving from rural to urban areas, and this trend has continued to increase dramatically. The 1980 census revealed that most Mexican Americans were urban residents.

Today’s Chicano movement sprang from the seething 1960s and included young high school and university Chicanos and Chicanas who firmly proclaimed their ethnic pride and demanded improved educational opportunities, expanded community amenities and more responsive social agencies. During the 1970s, Mexican Americans began to participate in force in the social, political and economic life of their new communities and to develop national and regional organizations to articulate their special needs and concerns.

Because of the historic diversity, our website blends the perspectives of authors with differing points of view. The result is a balanced narrative that recognizes Mexican Americans’ vital role in the history of the United States. (Text and photographs from the Americans All Classroom Resources.)

Jovita Idár, teacher, journalist, and political activist was born in Laredo in 1885, one of eight children of Jovita and Nicasio Idár. She attended the Holding Institute (a Methodist school) in Laredo, from which she earned a teaching certificate in 1903. She then taught at a small school in Ojuelos. Inadequate equipment and poor conditions, as well as her inability to improve them, frustrated her, so she resigned and joined . . .

Emma Tenayuca was born in San Antonio, Texas, one of 11 children, and lived with her grandmother to ease the burden on her family. While attending Brackenridge High School, she was struck by the differences between what she read about life and the realities she witnessed around her every day.

Emma Beatrice Tenayuca, Mexican American labor organizer, civil rights activist, and educator was a central figure in the radical labor movement in Texas during the 1930s and a leading member of the Workers Alliance of America and Communist Party of Texas. She is perhaps best remembered for her role in organizing the largest strike in San Antonio history, the Pecan-Shellers’ Strike of 1938.