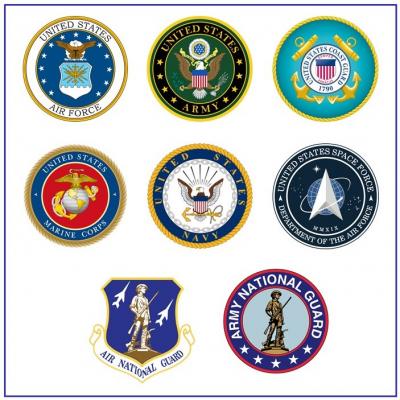 The story of America is about the countless men and women who give up their own comfort, the company of their loved ones, and sometimes their lives, in service to our nation. From the Revolutionary War to the worldwide fight against ISIS, in times of both war and peace, military personnel endure hardship so Americans can enjoy peace and freedom. Yet, because these men and women often serve in anonymity, their stories of sacrifice and dedication to duty can be lost forever. By creating and sharing a permanent record of their service, current and future generations gain insights and inspiration.

The Army, Marine Corps, Navy, Air Force, Space Force and Coast Guard are the armed forces of the United States. The Army National Guard and the Air National Guard are reserve components of their services and operate in part under state authority. From its inception during the American Revolutionary War, the U.S. Armed Forces have played a decisive role in the history of the U.S. It helped forge a sense of national unity and identity through its victories in the First Barbary War and the Second Barbary War. It played a critical role in the American Civil War, keeping the Confederacy from seceding from the republic. The National Security Act of 1947, adopted following World War II, created the modern U.S. military framework. The Act established the National Military Establishment, headed by the secretary of defense; and created the U.S. Air Force and the National Security Council. It was amended in 1949, renaming the National Military Establishment the Department of Defense, and merged the cabinet-level Department of the Army, Department of the Navy, and Department of the Air Force, into the Department of Defense.

Marine Corps veteran Brendan Fitzgerald and his dog Russell offer hope and courage to veterans, their families, and others struggling to overcome trauma. Russell became the first service dog to “report for duty” at the Department of Veterans Affairs.

Zebulon Montgomery Pike, United States Army officer and Western explorer, was born on January 5, 1779, at Lamberton, now a part of Trenton, New Jersey, the son of Isabella (Brown) and Zebulon Pike, a veteran of the American Revolution and a lieutenant colonel in the United States Army. After receiving some education in New Jersey and Pennsylvania, young Pike entered his father's regiment, the Third United States Infantry, as a cadet.