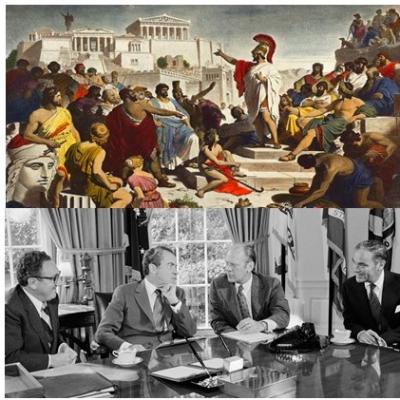 A politician is a person seeking or holding an office in local, state or federal governments. They propose, create and support laws or policies that govern the people in their jurisdiction, and seek to achieve political power in any bureaucratic institution.

Politicians are known for their rhetoric, and for using common themes that allow them to develop their political positions in terms familiar to their voters. They, of necessity, become expert users of all forms of media. In the 19th century, they made heavy use of newspapers, magazines, and pamphlets, as well as posters. In the 20th century, they branched into radio, television and social media, making television commercials the single most expensive part of an election campaign. In the 21st century, they have become increasingly involved with the social media based on the Internet and smartphones.

Rumor has always played a major role in politics, with negative rumors about an opponent typically more effective than positive rumors about one's own side. Once elected, they become a government official and have to deal with a permanent bureaucracy of non-politicians. Historically, there has been a subtle conflict between the long-term goals of each side. In patronage-based systems, such as the U.S., winning politicians often try to replace the bureaucracy with local politicians who formed their base of support, known as the "spoils system". Civil service reforms are contantly trying to eliminate this activity.

Although not universally true, some politicians are criticized for being out of touch with the public. This is based on how they speak, which has been described as being overly formal and filled with many euphemistic and metaphorical expressions, commonly perceived as an attempt to "obscure, mislead, and confuse" the listener. Some are also considered liars and manipulators, taking personal benefits rather than working for the public good--or supporting others who do.

At the groundbreaking ceremony for the Ronald Reagan Presidential Library, held on November 21, 1988, President Reagan proclaimed, “But I believe that scholars of good will . . . will judge our efforts well. But as for us, at present, we can only say this: we have done our best and we pray it has been enough.” At its conception, the future Reagan Library was faced with three major questions . . .

Frederick Douglass was an American social reformer, abolitionist, orator, writer, and statesman. After escaping from slavery in Maryland, he became a national leader of the abolitionist movement in Massachusetts and New York, becoming famous for his oratory and incisive antislavery writings. His brilliant words and brave actions continue to shape the ways that we think about race, democracy, and the meaning of freedom.

Edward M. Kennedy, born February 22, 1932, to Joseph Patrick and Rose (Fitzgerald) Kennedy in Boston, MA., was, at his death, the third longest-serving member of the U.S. Senate in American history, having been elected to the Senate nine times. He called health care “the cause of my life,” and succeeded in bringing quality and affordable health care for countless Americans, including children, seniors and Americans with disabilities.

Born in Boston, Massachusetts, on September 6, 1888, Joseph Patrick Kennedy was the son of Mary Hickey and Patrick Joseph Kennedy, an important figure in the Irish community of Boston. Joseph grew up in East Boston and attended Catholic schools until the eighth grade when he was enrolled in Boston Latin School, a college prep academy in the Boston Public School system. Despite an aptitude for mathematics, his academic record was mediocre at best.

John Fitzgerald "Jack" Kennedy, often referred to by his initials JFK was an American War hero, served as a Democratic member of the U.S. House and Senate and then elected as the 35th president of the United States, serving from January 1961 until his assassination in November 1963. He was the author of three books, A Nation of Immigrants, Profiles in Courage and Why England Slept.

Jerald Podair, professor of history and the Robert S. French Professor of American Studies at Lawrence University, became interested in Joseph McCarthy in 1998 when he moved to McCarthy’s hometown of Appleton, Wisconsin. His views McCarthy’s story as a paradoxical mix of American triumph and tragedy began at that point. This presentation, titled  Joseph McCarthy: Appleton's Hometown (Anti) Hero, was made to the Appleton Historical Society, September 12, 2018.

The name of Charles Thomson is not as familiar today as it was in the early days of America when it was widely known and respected. Born in County Derry, Ireland, Thomson was one of the most influential men of the entire American Revolution. He served as Secretary of the Continental Congress for over 15 years and was the Chief Executive of the American Government several times between 1776 and 1789. He also designed both sides of the Great Seal of the United States